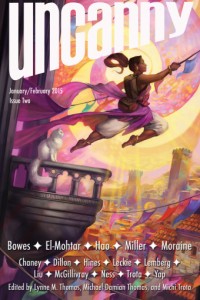 Published: January/February 2015 in Uncanny (you can read it free at the link provided)

Length: novelette (I only read it online)

Setting: Beijing, some time in the future

Interest: It won the 2016 Hugo award for best novelette. Since it was easily read online, I decided to read and review this story instead of my usual short fiction.

Summary: Lao Dao is a waste worker in Third City. He’s content with his meager life, except he wants to send his adopted daughter to school. That costs money. To get the money, he finds an opportunity to carry a message from Second City into First City and back again. It involves some risk, but he’ll quickly make a fortune. While in First City, he sees some of the politics that control the city and how the five million people in First City control the 75 million people in Second and Third City.

Final thoughts: A fascinating setting that drives the story. How do the rich share a city with the multitudinous poor without being inconvenienced? By building a system where different groups of people get to use the city at different times. The richer you are, the longer you get be out in the real world (First City is up for 24 hours, Third City only for eight). For once we don’t get a protagonist who’s trying to change the system. Instead, he just wants to make enough money to educate his kid. First and Second Cities are much more spacious than Third City, but he’s still happy to get back home and go back to work.

Title comes from: Every 24 hours, the current city of Beijing (the setting for the story) would fold up and flip 180 degrees with the city that’s underground.

What do you think? Cancel reply

This site uses Akismet to reduce spam. Learn how your comment data is processed.